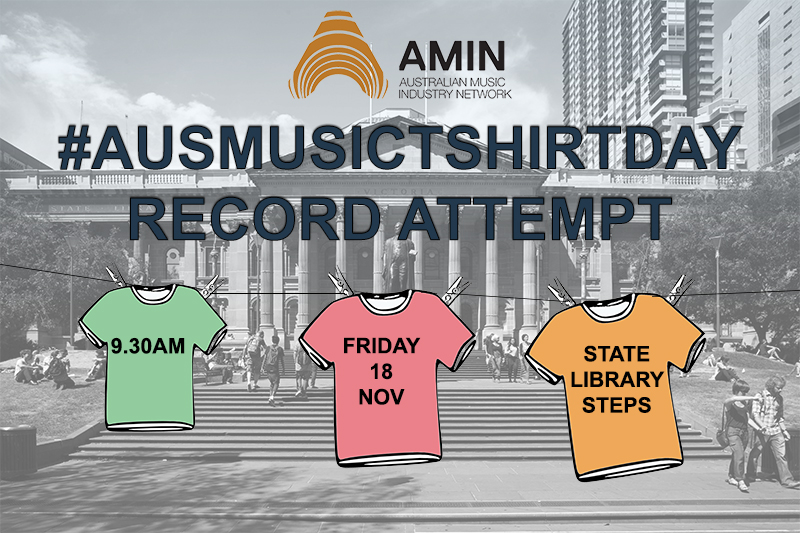 On Friday 18 November 2016 the Australian Music Industry Network (AMIN) will attempt to set a new (unofficial) record for the most Australian music t-shirts in one photo (on bodies) to celebrate and raise awareness for Ausmusic T-Shirt Day and we need your help!

The record attempt will take place in Melbourne at 9.30am on Friday 18 November 2016 on the steps of the State Library of Victoria, where the music industry will be gathered at the Melbourne Music hub for the Face The Music Conference. We encourage anyone attending Face The Music or participating in Ausmusic T-shirt Day in Melbourne to join us on the steps to be part of the photo.

All those involved will also be treated to a free performance from Nai Palm which kicks of 9:30am on the Forecourt of The State Library as part of the Melbourne Music Week Morning Ritual Sessions.

#AUSMUSICTSHIRTDAY will be celebrated across the country and AMIN is encouraging all fans, including politicians and public servants, to don their fave band t-shirt to show support for Ausmusic T-shirt day.

“Over in Adelaide there’s a mini market outside St Paul’s Creative Centre the day before #ausmusictshirtday to sell local band t-shirts. Music SA is right behind this campaign and is delighted that local and state employees will be proudly promoting Australian music at work on Friday 18th November and wearing their favourite band.” – General Manager of Music SA

Check out your local music peak body website and local gig guide to see what is happening in your area. Gather your colleagues/family/friends and show your support for Australian music